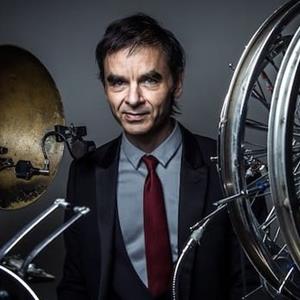 One of the most imaginative characters on the pop music fringe, since the year 2000 Thomas has been travelling the world performing with his evolving “band” of bizarre self-made
Harry Partch-esque instruments including a motorized drum machine made of bike wheels called ‘Mother Superior’ and a pimped-up
Dr. Seuss-ian Gramophone called ‘The Hornicator’, as well as his venerable resonator guitar ‘Hank’.
Time Out
magazine has dubbed him
“The king of home-made instruments”
while Splendid magazine called him
“one of the five or ten best singer/songwriters in the world that you’ve never heard of…an exceptional talent, unique and resistant to comparison, yet fairly accessible even to casual listeners.”