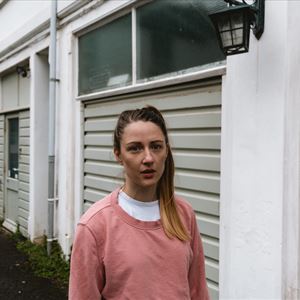 As a songwriter in a missionary family, Tina expected her songs to find their home in the church halls she grew up in. But it wasn’t until she began performing on the London open mic circuit that she cut her teeth as a performer and honed her craft into a treasure trove of songs with a depth and emotional intensity reminiscent of PJ Harvey, Wolf Alice and John Mark McMillan.

Featured on Spotify's New Music Friday and Mellow Pop playlists, BBC Introducing London, Hoxton Radio and Sounds Magazine, her latest EP is described as ‘a collection of moving, honest, brave songs that will school its listeners in empathy and introspection.’ (Get In Her Ears).

After clocking up over a million Spotify streams, this year saw Tina embark on her first UK headline tour and make appearances at UK festivals including ‘The Big Festival’, ‘Big Church Day Out’ and ‘The Great Escape’, as well as play support slots to Zach Winters, Joshua Luke Smith and Danny O’Callaghan.

Heart, Teeth, Hands was released on 27 September and is the final song in the ‘Underrated Animals.’ She’s currently working on a new EP.

‘A punchy and infectious pop package, tied neatly with her distinct and lavish vocals as the bow on top.’ – Louise Dodgson, Unsigned Guide

‘Find you is a confessional song of courageous honesty and heart breaking imagery. A masterly piece of pop art.’ – Listen With Monger

‘The London based artist is an arch manipulator of minimalist music to create emotional and stirring music that speaks right to your soul.’ – Cross Rhythms Praise for 'My Concrete Heart (Will Beat Again)' EP

‘Inspired by the likes of Wolf Alice and Arcade Fire, London-based artist Tina Boonstra writes in a vulnerable, yet determined vein. Her debut EP ‘My Concrete Heart (Will Beat Again)’ – is a collection of moving, honest, brave songs that will school its listeners in empathy and introspection.’ – Get In Her Ears

‘On the one hand, an earthy folk record basking in melancholy whilst on the other, it takes an alternative rock and indie venture. That the EP blends together these elements so well is the mark of a truly talented artist.’ – Mirrors We Are

‘A meticulously crafted and developed release and among the best of this year thus far. It's hopefully only a taste of what's to come. With a strong voice and a firm hold of her craft, Tina Boonstra is an artist to watch.’ – A Diverse Sound

'The open weave and simplicity of the architecture of ‘I Think I See You Now’. surrounding the fragile vocal, which threatens to splinter as it emerges from the speakers, finds the audience hushed in unwavering attention as the emotionally charged composition floats through the room.' – Emerging Indie Bands

‘It’s powerful stuff...Tina’s set has been spectacular. A real revelation and another addition to our iPod.’ – Peter Goodbody Get Into This - Liverpool

London-based singer-songwriter Imogen Mahdavi is known for her unique and rich vocals, which tell a thousand stories. With a slew of wistful indie-pop releases under her belt, the musician has forged her own path, carving her name with her beautifully introspective creations. Radiating with sincerity and grace, Imogen is unlike anything you have heard before.
Imogen has had tastemaker support from the likes of BBC radio (London, Cambridge, Leeds), USA Radio (Dash Radio, Apple), Clash Magazine, i-D Magazine, Earmilk, Wonderland Magazine, Glitter Magazine (USA), ITV as well as having performed a lead role on the hit UK nationwide play ‘Dressed’ (which she also penned the music for)