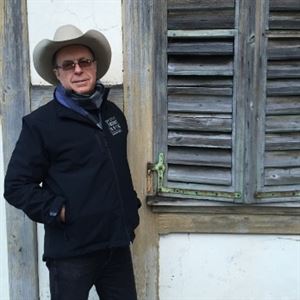 And outstanding record from an exceptional songwriter... It takes some sand to put out an album that shoots for “Jack Kerouac meets Johnny Cash in Bakersfield”. Tom Russell’s extensive resume and impeccable pedigree notwithstanding, it’s a high bar to set. The songs on his new album ‘October in the Railroad Earth’ easily sail over that bar.
Americana UK Feb. 2019

Just about every time Russell releases an album, I say it might be his best, and I’m prepared to say that again regarding the new October in the Railroad Earth...I continue to maintain that he’s a national treasure; and I remain baffled by the fact that he’s not as well known as such other folk masters as Leonard Cohen and John Prine...Like the vast majority of Russell’s earlier work, this is four-star material, from start to finish. Don’t miss it. Jeff Burger, Americana Highways

Painter, author, acoustic troubadour, and all-around Renaissance man...widely acclaimed as one of the finest songwriters of his generation...if you'd like to be assured about the enduring emotional power of the popular song you'd be well advised to lend an ear. UK Regional Press (100 Papers)
Feb. 2019

Celebrated singer-songwriter, artist and author on reassuringly vivid form. Russell has made a career from surveying the mythic aspects of America.
UNCUT, April 2019

Whether you look at, listen to, or read Russell’s creations, it’s always a fascinating expedition to far-flung places, slightly skewed yet true-to-life adventures based on the reality that exists between his ears.
No Depression 3/15/19

This one raises the bar even higher...there's not a dud track here. This one should be in every self-respecting country devotee's collection. 5 Stars.
Maverick Magazine April/2019

For over five decades his work has documented an all-but-forgotten North America -- from Mexico to the Northwest Territories -- through cultural and historical human archetypes, landscapes, events, and roads... After dozens of records, it's impossible to rank this in Russell's catalog because the vast majority of his albums -- this one included -- are prized treasures in the wandering American song man tradition.
Tom Jurek, All Music Guide, 3/19

When it comes to contributions to traditional American art forms, there’s not much left that hasn’t been touched by the hands of Tom Russell...This album is a story of America, and who better to tell it than Tom Russell. His years have only embellished and refined his wit and craftsmanship, and he never lost his hunger along the way. There are good reasons why Russell is so revered by his musical and literary peers, and those reasons remain evident on October in the Railroad Earth.
savingcountrymusic.com

Russell’s albums are usually special treasures. Count this among them. His stories are always worth hearing. Tom Russell may well be America’s most prolific and criminally under recognized songwriter...October in the Railroad Earth can now sit comfortably beside them. Russell is simply the best American storyteller. Glide Magazine, 3/15/19

I am now on the third consecutive play. It’s fabulous. Great songs, great performances, great production.
Once again, I can stand on my coffee table and say Tom Russell is the “finest singer-songwriter working in America today!”
Alec Wightman (Past Chairman of the Board: Rock and Roll Hall of Fame, Cleveland)

A clutch of great new songs by the American troubadour...his songwriting crossing new boundaries while staying faithful to his old roots and themes. Country Music Magazine

Tom Russell is often dubbed the Godfather of Americana, but he's uncomfortable with that label, he moves around genres and crosses continents, and his songs that have been covered by everyone from Johnny Cash to Joe Ely to K.D. Lang...Russell is that rare breed that excels at all forms of artistic pursuits. A Renaissance man.
Songwriter Series 18,
Country Music Magazine

Russell describes this as Jack Kerouac meets Johnny Cash in Bakersfield and, yes, it is that good. 9 stars.
Peterborough, Telegraph

Rolling Stone has called Tom Russell "the greatest living folk-country songwriter" and who am I to disagree? In fact, for me, Tom Russell can do no wrong , having released a succession of brilliant albums...Now, the good news is that Tom is back with a new album "October in the Railroad Earth," which takes its title from a poem by Jack Kerouac. The even better news is that it is another cracking album from Tom. Peter Cowley, FATEA

Tom Russell is a bit of a legend in these parts. His shows in the Errigle Inn and Flowefield Arts Centre live long in the memories of those who were lucky enough to catch him killing packed houses with his top drawer song writing and captivating stage presence. It’s sometimes difficult to bottle the essence of that energy in a recording studio but, fear not...his latest has great songwriting, distinctive high power vocals, top class musicians and crystal clear production. Oh and lovely packaging, complete with original Tom Russell artwork.
Folk and Tumble, 3/19