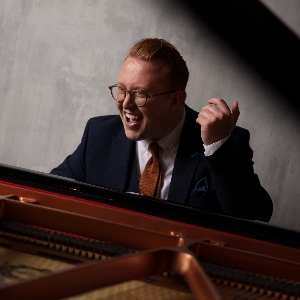 The mantle of UK Piano Man has been dominated by Elton John, Jools Holland and Jamie Cullum.
Over the past five decades, no one else has come remotely close – until now!

Hailed by musical legend Jools Holland as “an extraordinary young talent” and global icon Tom Jones comparing him to Little Richard, Tom Seals is already a huge hit at both home and internationally enjoying regular sell-out shows at London’s legendary Ronnie Scott’s as well as the world-famous Birdland Jazz Club in New York City and the prestigious Dubai Opera House.

And now this piano man extraordinaire is bringing his unique style to Smithfield Piano.

Tom Seals represented the UK on National Day at the Dubai Expo in 2022, performing in front of HRH Prince William. With a major label behind him, a headline TV Show of his own on Sky, support from blue chip brands, a string of chart hits under his belt – not to mention smashing album of incredible tracks due for release later this year; Tom Seals is exploding everywhere! He also live streamed from Dubai Opera House to Birdland in New York alongside Billy Joel, Sting, Elvis Costello, Whoopi Goldberg and President Clinton!

“A master of the piano and vocals to pierce your soul. A boogie-woogie genius and quite charming with it all” Close Up Culture

“He plays the hell outta them keys!” Jennifer Hudson