TRANSMISSION the Sound of Joy Division 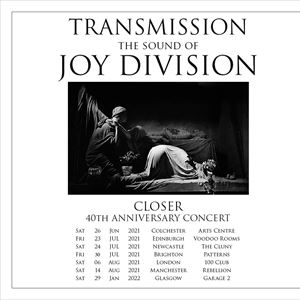 All Transmission 'Closer" performances
Have tickets to sell? – Find out more

TRANSMISSION: THE SOUND OF JOY DIVISION

After selling out the 100 Club in 2018 with the 40th anniversary 'Unknown Pleasures" concert, Transmission: The Sound of Joy Division are back to perform the 1980 second and final Joy Division album in full + a second set of other Joy Division classics.

"Closer" was released in June 1980, two months after the untimely suicide of lead vocalist Ian Curtis. Named 'Album of the Year" by the NME in 1980, "Closer" is widely regarded one of the finest releases from the Post-Punk period.