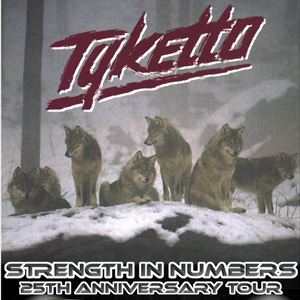 All Tyketto performances
Have tickets to sell? – Find out more

Tyketto exploded onto the international music scene in 1991 with their acclaimed Geffen debut, “Don’t Come Easy”, which introduced the iconic hits, “Forever Young”, “Wings”, “Seasons” and “Standing Alone”. The album produced a #1 MTV request video on both sides of the Atlantic, and two AOR breaker singles.

Their 1994 follow up, “Strength in Numbers” was a European hit, and the video for “The End Of The Summer Days” was a top request on both MTV UK and Europe. The band continues to tour and draws big crowds around the world with their high energy concerts and the release of their album, “Dig In Deep”.

“DIG IN DEEP” entered the UK Official Radio 1 rock chart at #11 next to Shinedown and Foo Fighters, entered HMV's rock-metal album chart sales table and was the #2 selling album in ALL HMV stores NATIONWIDE in Britain.

Brand new album, “REACH”, was released late 2016 to fan and critical acclaim worldwide. With the release of videos for the title track, Reach, and also the barnstorming, Kick Like A Mule, and with the album charting the UK rock charts at Number 5 and climbing to Number 2, plus smashing the Top 40 charts across Europe, Tyketto have ignited a fire that has no intention of being extinguished!