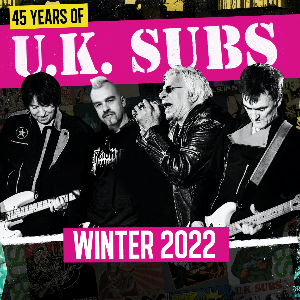 All U.K. SUBS + PETER AND THE TEST TUBE BABIES performances
Fan-to-Fan Resale Tickets
AGMP presents
U.K. SUBS - 45th Anniversary
+ special guests: PETER AND THE TEST TUBE BABIES
Inspired by The Damned at the birth of British Punk, the now equally legendary Charlie Harper formed the Subs out of his then R&B outfit The Marauders, late in 1976.
Starting out as The Subversives, the name was shortened to The Subs and then changed to U.K. Subs, whilst early line-ups merged their high-speed R&B sound into punk.
Through 1977 and 1978 the band played shows all over London including the infamous Roxy punk club, building up a fiercely loyal and sizeable following.
In 1979, they signed to Gem Records and became one of the most consistently and visibly successful punk bands, with seven consecutive UK Top 30 hits between 1979-81 - Stranglehold, Tomorrows Girls, She's Not There, Warhead, Teenage, Party In Paris
and Keep On Running. They also scored two UK top ten albums - Brand New Age
and Crash Course.
Brighton Punk band Peter and the Test Tube Babies released their debut single Banned from the Pubs
in 1982 and followed it up with the essential LP The Mating Sounds of South American Frogs
the following year.