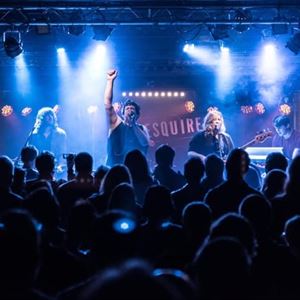 Variously described as post britpop, prog, glam and punk, Ultrasound, preferring to remain uncategorisable, came together in London during the Summer of Britpop, after meeting at College in the North of  England.

After playing together for some time, they became the "victims" of a music industry buzz, culminating in them signing to Nude records, and releasing their double album “Everything Picture”, which reached number 17 in the charts and saw them lauded by the press and public alike , making appearances at all the major festivals and a slot on "Later with Jools Holland". Having achieved what they set out to achieve the band went their separate ways for 10 years.

Upon hearing that Tim Smith of the Cardiacs was ill Ultrasound decided to reform for a benefit gig and discovered that the world seemed to have caught up with their music, and their debut album was starting to be regarded as a cult classic of the 90’s. Since then they have recorded two highly regarded albums "Play For Today" (2012) and "Real Britannia" (2017), and toured several times headlining their own sell out shows.

Having bought up the rights to their first album, the record label One Little Indian have decided to commemorate its 21st anniversary by re-issuing it along with  many extras, and to co-incide the band will be playing live.