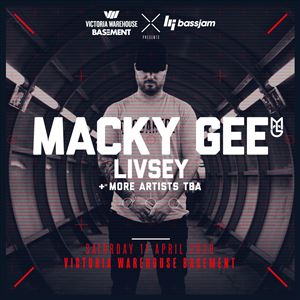 BassJam are pleased to announce that they are joining forces with Manchester’s newest underground music venture VW Basement to bring Drum & Bass legend Macky Gee, Bass DJ Livesy, more headliners TBA and a host of supports to the intimate cellar spaces of the iconic Victoria Warehouse on Saturday the 11th of April.

Kent based Drum and Bass don Macky Gee has enjoyed huge success since beginning his DJing and Producing career at the young age of 16. His heavy bassline and choppy synth combinations have resulted in huge support from Radio 1, Radio 1Extra, Kiss FM and Rinse FM, and his huge 2016 album ‘Sway’ made it into the Official Top 20 charts in both the UK and Europe. Macky is also one part of one of the biggest acts in DnB right now, SaSaSaS, who have been causing a major storm in the festival world and selling out club shows across Europe. He is sure to have the entire basement space going wild during his set, this is most definitely a debut show not to be missed.

Leeds born Bass DJ Livsey has cemented his position as an in-demand bookings in the north in recent months, laying down numerous releases on the likes of Deeprot, Second To None and even his own Label 'Switch Up' Records. Taking influence in his productions across a wide range of genres and artists such as Skrillex from the early 2010 Brostep/Dubstep era, ChrisLorenzo & Taiki Nulight with their Night Bass signature sound, Drum & Bass kings Noisia, along with his fondness of garage-esque drums have led him to the ‘Wubz’ being put out today. At only 21 he has supported the likes of DJ EZ, TQD, My Nu Leng, Sigma, Pendulum, JME, Stormzy along with a host of other names both in the UK and overseas.

There are still more headliner acts to be announced for this event, and judging by the acts already announced, there’s no doubt they’ll be artists you do not want to miss out on.

Joining Macky Gee, Livsey + the artists still to be announced on the bill will be drum & bass DJ and Producer Lance Godfrey hailing from Chester, PierJam resident bass DJ & Producer Mike Reevey and the Liverpool based DJ & Producer FOCUS - a host of supports that are certainly to be watched out for in the future.

The VW Basement is the newly revealed music venture to come from the Victoria Warehouse music team. The Basement space is set in the depths of the cellar spaces underneath the iconic warehouse, consisting of two rooms with low ceilings and exposed beams - there is a very industrial vibe that is sure to go down a treat with event attendees on the night. Don’t miss out on the debut show in this exciting new underground venture that’s been on the tip of everyone’s tongues since it was unveiled last week.

Tickets to this event go on general sale on Friday 28th of February at 9am.