We Are The Mods - All Dayer Tickets

This is the Modern World Exhibition, Brighton. Saturday 27 Aug 2022 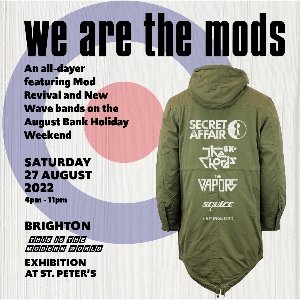 This is the Modern World Exhibition, Brighton

An all-dayer featuring Mod Revival and New Wave bands at St. Peter's Church adjacent to the This is the Modern World Exhibition.
The late 1970’s mod revival scene, with The Jam at the forefront of the movement, is represented with an all-dayer featuring some of the most prominent artists from that era including Secret Affair (’Time For Action’, ‘My World’), The Chords UK ('Maybe Tomorrow’, ’Something’s Missing’), Squire (‘Walking Down The Kings Road’, ‘It’s a Mod, Mod World’) along with The Vapors ('Turning Japanese', 'Jimmie Jones') who toured with The Jam and other Mod Revival acts at the time and more to be announced shortly.