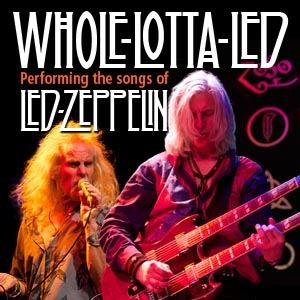 St Mary in the Castle, Hastings

Fan-to-Fan Resale Tickets
Black Rabbit Productions Presents
Whole Lotta Led
Whole Lotta Led are the longest running, full-time professional tribute to Led Zeppelin.
Now in their twenty-fourth year they are undeniably the UK’s leading tribute to Led Zeppelin with their customary two and half hour shows receiving acclaim from Zeppelin lovers the length and breadth of the UK.
Since their formation in 1996 the band have continually led the field of Zep tributes and with over 1,500 shows to their name they have performed ‘Stairway To Heaven’ more than any other band in the world - INCLUDING Led Zeppelin.

“You’re getting great reviews, I wish you all the best” JIMMY PAGE

This is going to be a fantastic 2 hour show, covering all the very best of Led Zeppelin, performed by the best Zeppelin tribute out there!