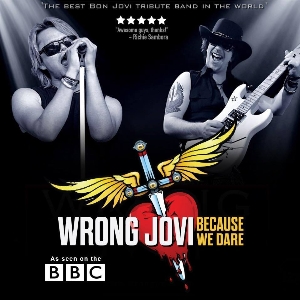 Wrong Jovi are widely considered to be “the best Bon Jovi tribute band in the world!” So much so, that
even the former Bon Jovi guitarist, Richie Sambora, has personally thanked the band for their hard work
and unforgettable performances. In their 7 years of touring, the band have performed across the world and
featured on the BBC prime time TV show, Even Better Than The Real Thing. 2019 saw Wrong Jovi perform
over 100 shows around the world. Selling out music venues and theatres across the UK and headlining
festivals in Malta, Abu Dhabi and Bahrain, as well as back home in the UK - including a headline slot on the
Electro Love stage at 2019’s Isle Of Wight Festival. Performing a set of greatest hits, live favourites and
rarities, the band ensure that there is something for the casual follower and even the most die hard of Bon
Jovi fans.