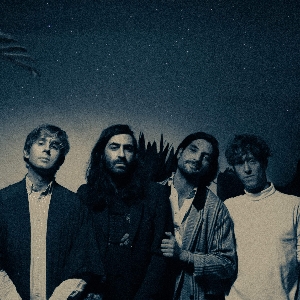 "We never had the intention to start a band," says Y?N Y?N’s Yves Lennertz. "Our idea was to just release a tape cassette for our friends."

However, when you land on something as distinct as Y?N Y?N’s sound, it soon becomes an inevitability that more ears are going to be pricked. The project began life in 2016 with Lennertz teaming up with Kees Berkers. What was an experimental jam session soon became something more as the Maastricht-based pair grew into a band and released a tape. Almost 150 shows later, the band’s unique concoction of disco, funk, psych and traditional Southeast Asian music has blossomed into something with charging momentum and fizzing with idiosyncrasy.

Two 7" releases followed on Bongo Joe Records and Paradiso Vinyl Club before the band arrived at releasing their debut, a rare album that manages to feel unshakably contemporary and fresh whilst also possessing some of the charm and magic you extract when you discover some lost musical gem from decades ago. There’s lashings of wobbly psych guitar that recall surf music via Spaghetti Western soundtracks that nestle neatly up alongside gently pulsing electronic vibrations to create a fusion of sounds that not only marries east and west but also future and past.

Of course it makes sense then that the band has a broad range of tastes and influences that filter into their distinctive output. "Our record collection is pretty diverse," says Lennertz. “Compilations from Thailand and Indonesia inspired us a lot in scales and rhythm, as well as afrobeat and Tuareg music. There were no boundaries during the whole process.” Perhaps the impact of Thai guitar playing is the one that seeped through most into the final record. “When I heard the compilation The Sound of Siam for the first time I was blown away,” Lennertz says. “I started to tune my guitar in different ways like the traditional phin guitar they use in Thailand.”

The recording session for the album was one that prioritised experimentation and freedom Lennertz says. “We recorded with our friend Gino Bombrini in his home studio, so we didn’t have the pressure of a normal professional recording studio. That gave us the freedom to do whatever we wanted. We also had the chance to use a lot of weird instruments too as Gino has a huge percussion collection.”

Robbert Verwijlen and Remy Scheren make up the rest of the band, with Bombrini joining them on their live tours as percussionist. Lennertz says they are shooting for something trance-inducing with their live shows, balancing a bluster of danceable energy with the intricate nature of their multi-genre playing. This balance and duality is something the band’s name of course touches upon. “Yin Yang is plays a big role in the band,” Lennertz says. “There's a poetry about the metaphors of it.” However, much like the band’s musical output, they are less focused on sticking to the traditional and instead finding their own path. “Our way of using it as Y?N Y?N has a different approach. We’ve made our own story.”