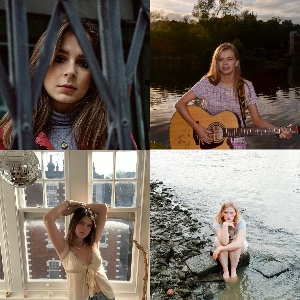 Zoe Clarke is a 20-year-old singer/songwriter from Dublin, Ireland. She has been playing guitar since the age of five and her musical interests have grown since. She released her debut ep ‘Safe & Sound’ in July 2020 which reached number 1 in Irish iTunes charts.
Zoe took to the main stage in the famous music venue Whelan’s in Dublin, Ireland for her first headline show on September 15th 2021.

Zoe is also a regular busker on Dublin’s Grafton Street. During the lockdowns, due to the current pandemic, she replaced her regular outdoor Grafton Street busking sessions with Instagram and Facebook lives allowing viewers to send in their requests which have proven to be successful.

Zoe's latest single 'My Happiness' was released in September of 2021. Zoe is currently working on her EP.

Originally moving from Scotland to London to study Psychology, Alex found herself inspired by her peers, re-igniting the creativity she had suppressed.

Taking the leap to follow her passion for songwriting and performing, with support from Apple Music and Creative Studios London’s artist development programme, she is in now in the midst of recording her debut EP to be released in Spring 2022.

With honest lyricism resting upon tender vocals and organic instrumentals, Alex Apolline creates a haunting, melody-rich soundscape - entering the scene with a core message; that vulnerability is our greatest strength.

Alaïs is an indie singer/songwriter born and raised in Italy, now based in London (UK). 2020 saw her debut single, Nightmares, along with two further releases, Stay? and Mine Tonight. 2021 is going to see the release of her new EP ‘Northern Lights’, in which she will go back to her roots for some singer/songwriter bedroom pop acoustic sounds - Stay tuned :)

Paris Paloma is a 21 year old singer-songwriter from the UK. Her debut single “Narcissus” was released in 2020, followed by three contrasting yet all magical singles, "Ocean Baby," "Underneath," and "Cradle," each gaining more popularity than the last. Her debut EP "cemeteries and socials," released in September 2021. The EP showcases five ethereal tracks that speak of female rage, grief, love, death and power. Paris’s newest single village song releases on November 15 on all streaming platforms.