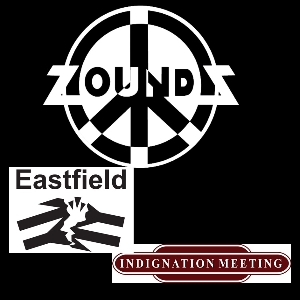 We are delighted to announce that anarcho punk legends Zounds are to return to Wharf Chambers in December for an afternoon of dancing, subversion and crisps. Joining them will be urban rail punks Eastfield, and suburban rail punks Indignation Meeting. There will also be delicious vegan food available supplied by Scoffs of Horsforth.

ZOUNDS
Do Zounds really need any introduction? Well, just in case.. Formed by Steve Lake in 1977, their debut EP ‘Can’t Cheat Karma’ was released on the Crass label in 1980, with the classic debut LP The Curse Of Zounds following in 1982. Both these releases, along with the singles Dancing, Demystification and More Trouble Coming Every Day were recorded by Steve on bass & vocals, along with Lawrence Wood on guitar and Joseph Porter (of Blyth Power fame) on drums. Joining Steve Lake in the current line-up are Paul O’Donnell (bass), Dominic Perez-Silva (guitar) and Paul Gilbert (drums).

EASTFIELD
Eastfield have been playing 3 chord, sing-a-long, simple catchy songs for over 25 years now, proudly practising the DIY ethic. Lyrically, they punctuate socio-political comment with associated references from the world of railways, adverts, railways,1970's TV programmes, railways, first-hand experiences and railways, making sure it always remains relevant - or not. That’s what it says on their website anyway, and who are we to argue?

INDIGNATION MEETING
Formed in 2019 by singer/drummer/songwriter Peter Hirst when he was just ten years old, Indignation Meeting are a punk rock band whose musical influences are not hard to spot (see above), with lyrics that reflect Peter’s passion for trains, stuffed toys and trains. For this very special occasion the core duo of Peter & his dad Michael will again be joined by Keith (ex Dog On A Rope) on bass guitar. Expect a combination of startling originality and blatant rip-offs!

Please note: Wharf Chambers is a members’ club – annual membership is just £2, but non-members can be signed in on the day. See:
https://www.wharfchambers.org/civicrm/contribute/transact/?reset=1&id=1