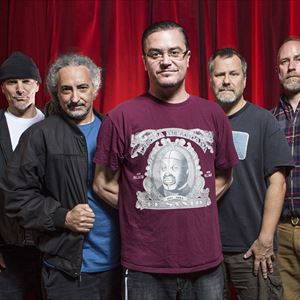 Faith No More is an American rock band from San Francisco, California, hailed as one of the most influential metal/rock bands of the late 80s and early 90s, and credited for inventing alternative metal and as an influence on nu metal. It was formed originally as Faith No Man in 1981 by bassist Billy Gould, keyboardist Wade Worthington, vocalist Michael Morris and drummer Mike Bordin. A year later when Worthington was replaced by keyboardist Roddy Bottum, and Mike Morris was ousted, the group began calling themselves Faith No More. After going through a series of singers which included Courtney Love, the band was joined by Chuck Mosley in 1983. The same year, Jim Martin was recruited to replace guitarist Mark Bowen. Faith No More underwent several line-up changes before releasing their first album, We Care a Lot, in 1985. Within a year the band signed up with Slash Records, and in 1987 their second album Introduce Yourself was released. Membership remained stable until vocalist Mosley was replaced by Mike Patton in 1988. In 1989, the band released their highly successful album, The Real Thing, which featured their breakthrough hit single "Epic". The band's next album, 1992's Angel Dust, was also highly successful and spawned the hit "Midlife Crisis", which became their sole #1 hit on the Modern Rock Tracks chart in their career. Faith No More however declined in popularity in the subsequent years. Longtime guitarist Jim Martin left the group in 1994 and was replaced by Mr. Bungle guitarist Trey Spruance. After the release of their next album, 1995's King for a Day... Fool for a Lifetime, Spruance was replaced briefly by Dean Menta, who would eventually be replaced by their current guitarist Jon Hudson. After releasing one more album, Album of the Year, in 1997, Faith No More broke up in April 1998, and all members began work on side projects.