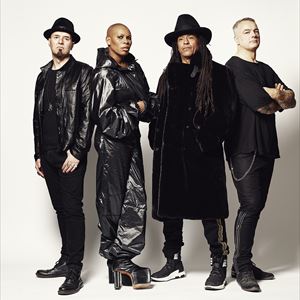 Désolés, il n'y a actuellement pas de spectacle en vente pour Skunk Anansie
Skunk Anansie is an English rock band whose members include Skin (born Deborah Dyer, 3 August 1967, Brixton), Cass (born Richard Keith Lewis, 1 September 1960, London), Ace (born Martin Ivor Kent, 30 March 1967, Cheltenham) and Mark Richardson (born 28 May 1970, Leeds). Skunk Anansie formed in March 1994, disbanded in 2001 and reformed in 2009. The name "Skunk Anansie" is taken from the West African folk tales of Anansi the spider-man, with Ô[][]SkunkÔ[]Ø added to "make the name nastier". They are often grouped as part of a Britrock movement, running alongside Britpop. The band, in 2004, was named as one of the most successful UK chart acts between 1952 and 2003 by the Guinness Book of British Hit Singles & Albums, with a total of 141 weeks on both the singles and album charts ranking them at #491. When the book first published this annual top 500 list in 2000, it only involved weeks spent on the singles chart until 2004's 17th edition, meaning the band's highest ranking has not been notified in any of the past editions. Their longest running release is 1996's Stoosh album with 55 weeks and a peak of #9. The band released their fifth studio album Wonderlustre (their first studio album after their reformation) internationally on 13 September 2010, preceded in August by its first single "My Ugly Boy".