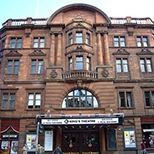 The nearest rail station to the King's Theatre is Haymarket, however to get to the theatre from a rail station it is easier to use Waverley Station and a local bus.

From the west end of Princes Street. The King's Theatre is in the Tollcross area of the city, on Leven Street. Turn right up Lothian Road at the Caledonian Hilton Hotel. At the very top of Lothian Road, there is a large junction, with three forks (known as Tollcross)- take the right hand fork. The King's Theatre is on the left hand side of the main road about 500m from the Tollcross junction.

The only parking available in the immediate vicinity of the King's Theatre is street parking. There's an underground car park off Riego St and there is an NCP car park about 15 minutes walk from the theatre, towards Princes Street, on Castle Terrace (24 hours, 7 days).

There are two accessible toilets at the King's theatre, one on the stalls level and one in the box office

There are six spaces in the stalls for wheelchair users, with adjacent seats for companions. Please let us know all of your requirements at the time of booking.

Assistance Dogs are welcome and we will be pleased to look after them during the performance if required. Water bowls are available.