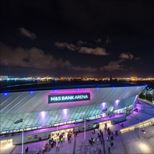 M&S Bank Arena is Liverpool's leading music and entertainment venue, located on the city's famous World Heritage waterfront. Since it first opened its doors in 2008, the arena has hosted a range of high profile events including the MOBO Awards, the MTV Video Music Awards and BBC Sports Personality of the Year, as well as global acts such as Beyoncé, Lady Gaga, Sir Paul McCartney, Queen and Stereophonics. For events with no age limit, under 14's must be accompanied by an adult. Children under the age of 14 are not permitted onto the floor for standing concerts and are only allowed into the venue with an accompanying adult in tiered seating. Certain concerts or events may be unsuitable for children under the age of 14, please check the event specific details for more info. If you are lucky enough to look under 25 you will be asked for I.D to purchase alcohol. The venue reserves the right to refuse service. Covid Related Entry Requirements can be found here

M&S Bank Arena is a 20-minute walk from Lime Street or a short taxi ride. You can also transfer at Lime Street onto the underground Wirral Line trains to James Street station (10 minute walk) or catch the CityLink Route C4 (7am - 8pm) directly to the Arena. If travelling from outside Merseyside, you can catch an underground train to James Street station from Lime Street station, inclusive of the cost of your ticket. Ring Traveline Merseyside 0871 200 22 33 for up to date information about your bus, train or ferry service. The Traveline is open from 0800 - 2000 every day of the week.

Most Liverpool city centre bound buses will call at either Queen Square bus station (a 15-minute walk) or Liverpool ONE Bus Station, which is only a five minute walk to the arena. The CityLink Route C4 bus links Queen Square bus station, James Street rail station and Liverpool ONE Bus Station to the Arena. CityLink Route C4 operates every 20 minutes on Mondays to Saturdays and every 30 minutes on Sundays, between 7am - 8pm, with a maximum fare of £1 per journey. Merseytravel prepaid tickets, National Concessionary bus passes and Arriva day tickets are all valid on this service. For up-to-date information on all bus, train and ferry services, call Traveline Merseyside on 0871 200 22 33, open 8am - 8pm, 364 days a year or visit www.merseytravel.gov.uk

The Liverpool Waterfront Car Park is signposted 'Waterfront' on the city wide 'available spaces' signage. They offer a flat fee of £5 for parking for all M&S Bank Arena event nights.