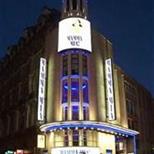 The nearest tube station to the theatre is Piccadilly Circus.

The closest train station to the theatre is Charing Cross.

Wheelchair access is available at the rear of the stalls, accessible via the ground level foyer. If you cannot transfer out of your chair companions can sit beside you. They also have a number of transferable seats available. For all queries and bookings for access, please call 0844 482 5137.

There is a hearing-Impaired infra-red system in the auditorium and induction loop at the Box Office.

Guide dogs allowed into auditorium, alternatively the venue staff are happy to dog-sit.