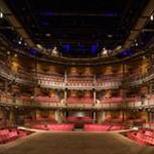 The Royal Shakespeare Theatre (RST) is a 1,040+ seat thrust stage theatre owned by the Royal Shakespeare Company dedicated to the British playwright and poet William Shakespeare. It is located in the town of Stratford-upon-Avon - Shakespeare's birthplace - in the English Midlands, beside the River Avon. The Royal Shakespeare and Swan Theatres re-opened together in November 2010 after undergoing a major renovation known as the Transformation Project.

Nearest British Rail is Stratford-upon-Avon, about 20 mins walk from the town centre. A direct train service runs from London Marylebone and connections from all parts of the UK to Stratford via other rail routes.

The Royal Shakespeare Theatre is along side the River Avon and is well signposted thoughout Stratford-upon-Avon. M40 from London or the Midlands. The M40 links to the M42 and M25 which gives access to M1, M5, M6, M4

There are 40 spaces in front of the Royal Shakespeare Theatre with a small charge (but they do fill up quickly). 200 pay and display spaces in Church Street car park, a short walk from the theatre (Open Mon-Fri 18.00hrs- Midnight, Sat and Bank Holidays all day)Street parking is impossible but there are several other car parks throughout the town but all are at least 15 mins away from the theatre so allow plenty of time.

The venue has wheelchair spaces. Please contact them to book and for any queries on 01789 272227.

The box office is fitted with a loop system and headphones are available from the venue itself.

All assistance dogs are welcome in the venue. Please contact the venue to arrange.