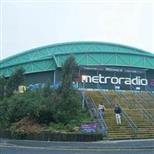 Tickets for events at Utilita Arena

Metro Radio Arena (formerly the Newcastle Arena and Telewest Arena) is a sports and entertainment arena in the city of Newcastle upon Tyne, North East England, United Kingdom. Owned and operated by the SMG Europe and sponsored by Metro Radio, it hosts music, entertainment, sports & business events. Having also had various professional basketball and ice hockey teams as tenants for much of its history, since 2009 it has had no ice hockey team after the departure of the Newcastle Vipers to the Whitley Bay Ice Rink, and no basketball team since the departure of the Newcastle Eagles to Northumbria University's Sport Central arena in 2010. Two well known local musicians conceived and helped build the arena, Chas Chandler and his business partner Nigel Stanger. The NYSE listed Ogden Corporation was awarded a 20 year contract in February 1995 to design the arena, and once completed, to manage the facility including booking and promotion. According to Ogden, the arena clearly filled a market opportunity for touring acts who had otherwise bypassed the area, with the next nearest local venue being the 2,000 seat Newcastle City Hall, and the only other medium sized venues being as far away as Sheffield to the south or Glasgow to the north. Acts that did visit the region often had to make use of the 3,200 seat Whitley Bay Ice Rink. The arena cost 10m pounds to build, and opened as the Newcastle Arena on Saturday 18 November 1995 with a basketball league game between the resident team the Newcastle Comets, hosting the Doncaster Panthers. The Ogden Corporation assumed full ownership of the arena after Chandler and Stanger sold their stakes. Chandler died in 1996 while Stanger died in 1999. In 1997 the arena was renamed the Telewest Arena after a sponsorship deal with the telecommunications and cable-television company Telewest. In 2000 the Ogden Corporation sold the arena to SMG for $240m. In January 2004 the arena was renamed as the Metro Radio Arena after a new sponsorship deal was signed with the independent local station Metro Radio. The seven figure deal was to last a minimum of three years. By 2005, the end of the first decade of operation, seven million people had attended events at the arena. For events with no age limit, under 14's must be accompanied by an adult. No under 14's will be permitted into the standing area for events that have this. If you are lucky enough to look under 25 you will be asked for I.D to purchase alcohol. The venue reserves the right to refuse service. Any accessible questions or enquiries must be made with the venue. You can call 0800 988 4440 (9am to 6pm, Monday - Friday, 10.30am to 3.30pm Saturday) You can also email: Newcastle.Accessibility@eu.asmglobal.com (Please note this email address is only for patrons who cannot operate a telephone and accessibility bookings. All other enquiries should be made via the booking hotline as replies will unfortunately not be given to any other issues).

The arena is a 5 minute walk away from the metro and train station Newcastle Central.

The Metro Radio Arena Newcastle is only 3 minutes from the A1 North - South route. Take the A184 signposted 'City Centre', then follow the A189 over the Redheugh Bridge. When in the vicinity of the Arena, follow the signs to the appropriate car parks.

Taxis can pick up on Railway Street/Arena Way before and after events. There is also a taxi rank at Central Station.

There are over 600 convenient Official Car Park spaces available on site at the rear of the building. Alternatively, when the Car Park is full, the venue recommend using the NCP Car Park located next to the Arena, with its entrance on Redheugh Bridge Road.

There are many wheelchair spaces in the arena. They need to be booked through the venue.

The arena has a loop system. Please contact them for more details.

Please contact the venue for further information as it depends on the type of event.

To better accommodate your needs, the venue have requested that all accessible queries and bookings be made via them directly. Wheelchair Access - There are many wheelchair spaces in the arena. Hearing Systems - The arena has a loop system. Please call 0800 988 4440 (Monday to Friday: 9.00am to 6:00pm and Saturday: 10.30am to 3.30pm) Their email contact is accessibility@smgnewcastle.co.uk.