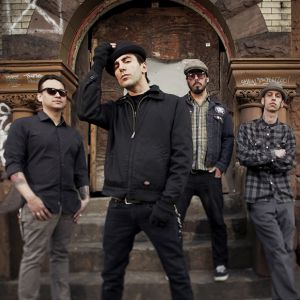 It all started on the streets of New York City in the early 90's where the A.C.'s released a number of EPs and compilation tracks on various labels before issuing their debut full-length on NY/HC pioneer Blackout in 1996. Damnation Overdrive showcased the A.C.'s adrenaline-soaked punk rock n roll, a sound called Dick Dale + Motorhead + The Misfits well, it equalled touring, both in dingy clubs and the enormous Warped Tour stages.

The A.C.'s returned in 1998 with Winner take All. This album expanded more into the surf guitar elements cathing the interest of Dexter Holland and Nitro Records who released Fuel for Life (produced by Roger Miret of Agnostic Front) in 2001. 2003 came Automatic. Produced by Blag Dahlia (Dwarves), mixed by Billy Milano (S.O.D.), it was widely hailed as the band's most intense work yet.

The Turbo A.C.'s supported the effort with an exhausting run of live dates. Avenue X next appeared in June 2005, followed by Live to Win one year later, followed by Kill Everyone, their biggest album yet, in 2011! Which brings us up to date... RADIATION Throughout all of it, constantly touring America, Canada, Europe, and Australia, feeling right at home doing major tours with a diverse and impressive group of artists like Flogging Molly, The Dwarves, The Dropkick Murphys, Turbonegro, Boss Hoss, Elle King The Hellacopters, and more. "Where most NYC punk bands have trouble gigging outside of the tri-state area The Turbo AC's are touring Europe on their own dime, sleeping in squats, crashing tour vans and then fixing it with duct tape (true story, I swear).

If The Turbo AC's were a black man with a funny hair-do they would be James Brown. - Put that in your nose and sniff it." (James Lee - Punk Magazine)